On July 17th, 2018, Hawaii County Police Officer Bronson Kaliloa was shot and killed while conducting a motor vehicle stop. As he has done hundreds of times since 2016, Brothers Before Others partner/member Jonny Castro sprung into action.

On March 5th, 2015, while on patrol, Officer Wilson simply stopped at a Game Stop in order to make a purchase for his son, unaware that he would be interrupting a robbery in progress. Upon entering the store, Officer Wilson instinctively drew fire and was killed. In order to commemorate the one year anniversary, Jonny decided to honor Officer Wilson by creating the portrait above. Since that portrait, Jonny has done hundreds portraits which he does on his own time and using funds out of his own pocket. With the help of BBO, Jonny then makes sure that these portraits get to the families and coworkers of the fallen hero.

As is the case with all line of duty deaths, Officer Bronson Kaliloa’s untimely passing touched the entire law enforcement community. In fact, Officer Kaliloa was the first to be killed in the line of duty by gunfire in his department’s history. Jonny honored Officer Kaliloa and his sacrifice by creating a portrait of him, even incorporating the Hawaiian tradition of a ‘lei’, often presented to another as a symbol of peace, love, honor or friendship. 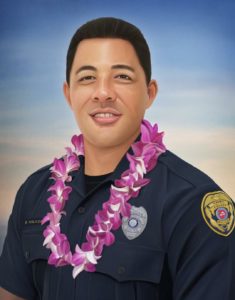 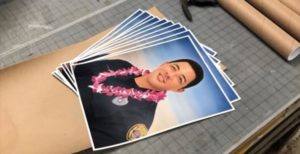 Jonny had several conversations with the Kaliloa family following the tragedy, recalling, “His family is among some of the most genuine people you’d ever meet. They really couldn’t have been any nicer, especially when you consider what they were going through. They relayed how much they appreciated the work I was doing and how much it meant, not only to their family, but to the entire community.”

Having friends in Hawaii and personal ties to the islands, BBO member, administrator and Miami Police Officer Tommy Reyes, immediately stepped up and, on his own time and at his own expense, asked that he be permitted to deliver the portraits to the Kaliloa family in time for the planned services. Tommy, who had been involved in other portrait deliveries, knew the significance that these portraits hold and wanted to make sure it was handled properly. 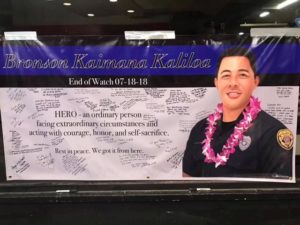 So, on August 4th, 2018, prior to the public services for Officer Kaliloa, Tommy spoke to approximately 100 members of Bronson’s family and department. Not only did Tommy hand deliver Jonny’s portrait to the family, but he also spoke about what brought him to Hawaii. As Tommy put it, “I wanted to speak about BBO and our mission. I wanted the Kaliloa family to know that the members of Brothers Before Others and the law enforcement community has them in our hearts. I wanted them to know that Bronson’s sacrifice will never be forgotten and, even when they think no one is thinking about them, we are.” 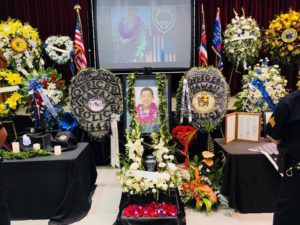 Tommy was also struck by the amount of police presence from the mainland. He stated, “I was honored to represent BBO. It was amazing to see how many people came from all over the United States. I saw at least two members from every chapter of Brotherhood for the Fallen, NYPD, Suffolk County PD, Chicago PD, Dallas PD, Fort Worth PD, and so many others. There really is nothing like this brotherhood.” 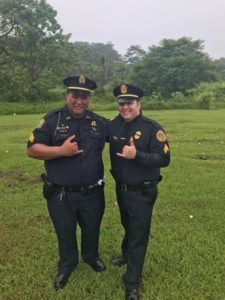 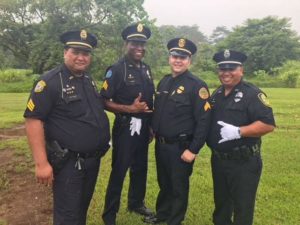 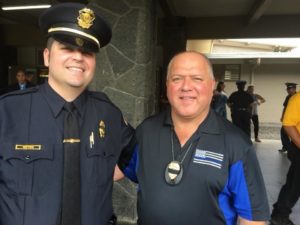 When he founded BBO in 2014, retired NYPD Police Officer Michael Burke couldn’t have predicted how far reaching this group would become. When reached for comment on this latest portrait delivery, Michael said, “Seeing Tommy step up like he did was no shock to me. From the time he joined BBO, he has been a major contributor to what we are trying to achieve as a group, even becoming one of our administrators. Tommy was our liaison at the Pulse Night Club shooting, where he personally handed out food and beverages to the first responders and those effected by the tragedy. The trip he volunteered for to Hawaii comes on the heels of him previously donating his time to be involved in the hand-delivery of Jonny’s portrait to the family of Baltimore County Police Officer First Class Amy Sorrells Caprio. He is an asset to Brothers Before Others and benevolence like his is uncommon in our line of work and epitomizes what makes this group so special.”

For more information on Jonny Castro and his work, he can be found on FB and Instagram by searching “Jonny Castro Art”.