It’s often said that no one takes care of a cop like a cop; and the members of BBO have demonstrated that time and time again. In this case, they were asked to step up for one of our own members.

Piggy-backing off of an event held by the Jersey City Police Department, representatives from “The Hoboken Man” salon located in Hoboken, NJ, were on scene donating free hair cuts and head shaves for anyone who wanted to stand in solidarity with Gina.

BBO founder Michael Burke designed tee shirts that were sold at the event, with 100% of the proceeds going directly to Gina. The tee shirt sales, along with donations collected that day and from the members of BBO raised $4,000.

In August of 2017, Gina was ruled cancer free. However, on May 8th, 2018, Gina is scheduled to have lymph node transplant surgery. We ask that, not only our members, but anyone reading this please keep Gina and her family in their prayers. 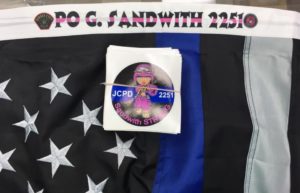 Gina: thank you for your service to both your country and your community. There is no doubt that you will conquer this next hurdle the same way you’ve conquered those in the past.

For information on breast cancer; the signs/symptoms, prevention, support and more, visit: