BBO founder Michael Burke said, “Honestly, I was watching ‘Extreme Makeover’ and thought that it would be nice to see something like that done for law enforcement.”. In that moment, the idea was born.

First step was finding a police department in need. Having a few members with affiliation there, including Captain (Ret) Jim Sepp and BBO Trustee Don Huneke, Bogota Police Department emerged as the choice of venue. Bogota’s headquarters also offered the perfect ‘canvas’ for what Michael Burke had in mind.

Since this was not going to be just another makeover, Michael needed to find someone special to handle the task. As such, he reached out to American Artist Scott Lobaido, and pitched what would be a one of kind mural.

Scott, a Staten Island, NY, resident, has been unapologetically honoring America through his work for over 25 years. Has has painted on canvas, walls and even roofs. 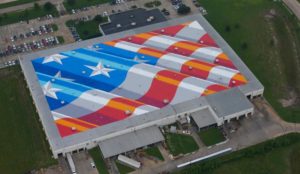 When approached about the idea of doing a blue line mural, Scott never hesitated. So in early June of 2016, Scott traveled to the Bogota Police Department and, in a matter of days, gave their building the facelift of a lifetime. Once Scott’s work was done, Michael Burke and other BBO members, including administrator and Fort Lee (Ret) Police Officer Steve Pumilia, single-handedly upgraded the landscaping surrounding the building. 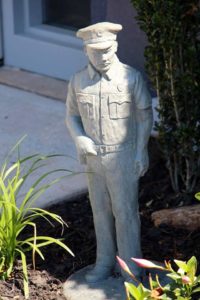 On June 18th, 2016, in the company of the Mayor, Police Chief, BBO Board/members and even local residents, BBO hosted a dedication ceremony at the Bogota Police Department to unveil the work that was done. To date, the makeover done and paid for by the members of Brothers Before Others, remains the only one of its kind. 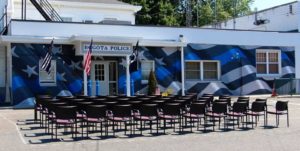 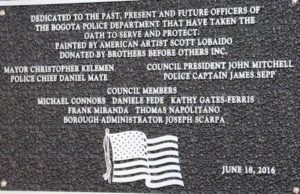 Since taking part in the makeover, Scott went on to paint other blue line related murals, including two done in honor of the 5 Dallas area officers killed in the line of duty on 07/07/2016. When asked about one of those murals, “5 Empty Chairs”, which was done in Dallas, Scott said: “The design on stripes represents the fabric of the Dallas Police Department Family. The officers’ names on plaques with no ranks symbolizes that they are human beings, just like the rest of us.” 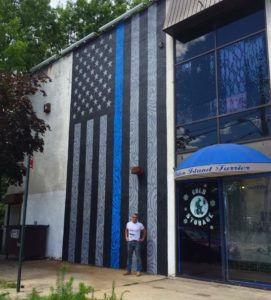 For more information on Scott and his amazing work, please visit: